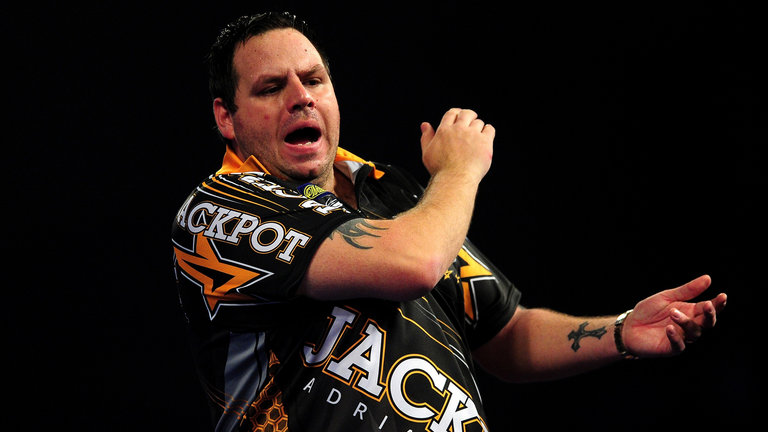 On Thursday night in Rotterdam, Wright needed to beat Raymond van Barneveld with Anderson defeating Lewis for him to qualify for the Premier League finals night.

But Jo Wright, allegedly private messaging a fan on Twitter who then made it public, stated: “Well we all know that Gary will be giving Lewis a position next week don’t we. Quite a nice bet again this year. As in giving Lewis the 1 point he needs to get to the play offs.”

After the match Wright then tweeted again: “I rest my case. Always Wright.”

That sent Lewis on a Twitter warpath to defend his and Anderson’s sporting integrity.

He blasted: “You are an absolute disgrace. It’s not Peter as he’s told me first hand he doesn’t use Twitter.

“You are one horrible woman, I’m never malicious towards anyone apart from yourself. I really do hope the DRA (Darts Regulation Authority) take this seriously, nobody in darts I know of would ever throw a game, we all practice hard to win.”

Wright’s wife Jo then replied: “It was taken out of context. Again. There was no accusations it was sarcastic private message 2 someone slating Pete.”

But Lewis hit back: “You still shouldn’t say that me or Gary are cheats. This is the most genuine sport out there at the minute.”

The row looks set to engulf Scotland’s World Cup plans with Anderson and Wright set to represent the Dartan Army on June 2-5 in Frankfurt.

Last year Scotland’s pair Ando and Wright reached the final only to lose out to England’s Lewis and Phil Taylor. Ironically it was Lewis’ 4-1 defeat of Wright in the last singles match that clinched it for England.

Previous to that Scotland have had a wretched record – crashing out to minnows Spain twice, South Africa and Northern Ireland last year.

Meanwhile Lewis was also involved in another BREEZEGATE drama in Rotterdam – but still qualified to the O2 finals for the first time in five years.

Jackpot walked off the world championship semi-final Ally Pally stage against James Wade in 2012 when he said a breeze was affecting his game – and it happened against in Rotterdam.

He said: “I’m just glad to be through to be honest.

“The wind honestly was really bad. Call it Breezegate or Windgate if you like. The darts were landing at funny angles. I had to change my aim by an inch to compensate for the wind blowing.

“It was tough playing Gary. We’ve won four world titles over past few years, it shows class and I’ve beat him and he’s beat me in one – I owed him one for January though!

“I’m looking forward to playing to Michael at the O2. I’m not scared of playing him, Phil or anyone. I can win this.”

*There’s over 350 high-quality cars in stock at Rix.

Not only are there top stars from Audi, BMW, Mercedes, Jaguar, Land Rover and Porsche – but all makes and models are available.
Plus there’s low-rate finance packages starting from under £100 a month and no payments made for six months.